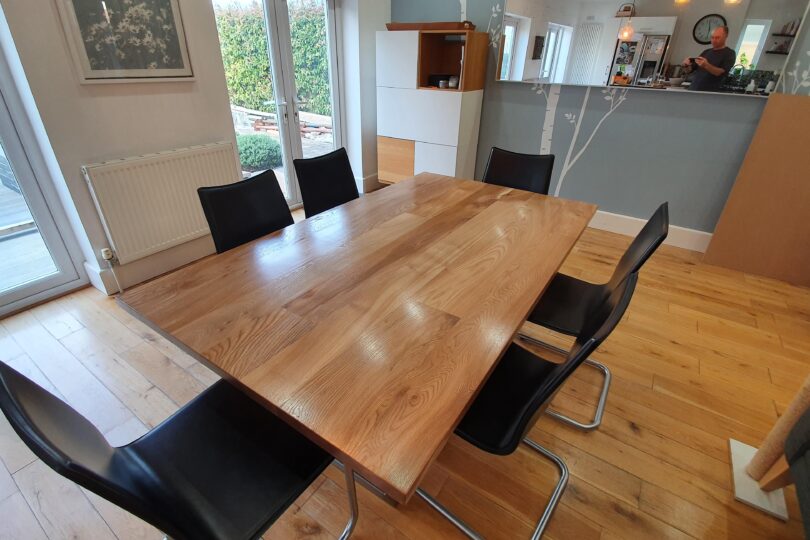 After 23 years dining around the first table I made, with so many great memories, its overdue time for an upgrade! The first table was made with the skills and tools I had at the time but it was getting a little warped making plates wobble and showing its age.

I had been thinking about this project for the last few years but knowing it would be a mammoth project, kept putting it off. Wanting to keep to a similar style as the first one, a large, very solid tabletop made from planks, I started by hunted around the internet for a supplier of thick English Elm slabs. Eventually, I found a sawmill in Wiltshire www.vastern.co.uk and drove for a couple of hours to collect it. I spent an hour looking through stacks of sliced tree in their sheds, picking out the best slabs with the help of a forklift, looking for ones with character but not too many splits. I estimated I’d need about 4m2 of rough wood to end up with 2.5m2 of decent wood once all the defects were discarded and it was all cut into planks.

The next challenge was getting it home, the wood was precariously balanced on the roof rack using a forklift which itself got stuck in gravel and needed towing by a larger lifter. The 7 slabs, each almost too heavy to lift were ratchet strapped down and after an hour of tweaking I convinced myself it might not fly off if I braked or cornered to hard. Then a very careful 2.5 hour drive home, all the time thinking I was going to be stopped by the police for driving with a dangerous load or need to do a sudden stop and loose the lot. Eventually I made it back.

Much measuring, head scratching and more measuring ensued as I tied to work out how to cut up the slabs into planks to get the quantity of wood I needed. I was trying to avoid the defects (of which there were lots) and include the most interesting knots, burs and grain. Knowing that once I started cutting if I had calculated wrong I would end up with a very expensive pile of firewood.

The next challenge was how to rip cut the slabs, they were too heavy to do the first cut on my little table saw so I cut them in half with a hand held saw, then roughly cut them to width on the table saw, leaving them with several cm of extra width and lots of extra length. Eventually I had them down to a dozen planks and was able to stack them in doors for about 3 months to dry them out. Occasional weighing of one plank until it stopped loosing weight let me know when they had reached a stable water content.

Next came another round of measuring, head scratching and planning as I tried to lay up the raw planks into their layout in the final tabletop. Some of them had warped and split while drying and became seconds and I was grateful I had allowed for so much wastage. Eventually I was happy with the design, enough for the tabletop and two wings which would be cut off at the end so their grain matched the table when attached.

Each plank had to be plained down using my under sized bench top planer and accurately cut straight along the edges to within a millimetre over their nearly 3m length. Cutting a perfect long straight edge proved one of the biggest challenges, I couldn’t get them accurate enough feeding them through the table saw so had to make a straight edge jig to slide the hand saw along. After a hunt around B&Q for a cheep machine straight edge I found some MDF in the offcuts bin. After several iterations of designing the jig and cutting better and better straight edges I was happy the planks had minimal seams.

Next I needed to glue and clamp the planks. First end to end to make the planks long enough. This involved another jig using a ratchet strap to get some pressure on the joint while it dried. Dozens of tweaks were needed to get the ratchet clamp to work. I built another little jig to drill the dowel holes in the right positions then pegged and glued 7 planks end to end.

More planing to get the final thickness and straight edge cutting over the full length. Once all the planks were ready it was time for the edge to edge glue-up. Much too big to do it in one go, I glued the planks one at a time. Each joint had around 18 dowels, so I had to drill about 200 holes in the edges, all accurate to less than 1mm. I made several cauls out of scrap to help keep the planks flat. Over the course of a week, I added one plank at a time gradually building up the table width. Getting enough pressure to squeeze the edges together using the few sash clamps that I had was tough, I ended up bending the handles trying to get extra pressure on the screws. Another problem was the weight, for the first time the tabletop was one solid piece and could only just be moved.

Almost done! I squared up the ends with the hand held circular saw and straight jig. Filled some small knot holes and sanded the surface from 80 grit to 500 grit which took another week. At this point I had to cut the wings off each end, trying hard not to mess up this last big cut.

I wanted to sign the underside with a message so I drew one using Inkscape then used a projector to shine the words onto the wood. Then traced over the letters with a pyro-pen to burn them into the wood.

And finally, after about 8 months the table was ready. I knew at the outset this would be a big project and I was very right but it was well worth the effort. The final table is lovely and I’m very happy with it. The grain in the Elm wood is beautiful and the table is heavy and solid. Looking forward to another 23 years of family and friends dining around something I made.